Congratulations to Trev and crew!

Trev Williams of The Doctrine completed and Paris-Brest-Paris 1,200km Randoneurring event!  It occurs only once every four years and is embraced by the imagination and hearts of all the small towns along the way.

He said “over 6,500 cyclists streaming through the French countryside with constant encouragement from young and old farmers was quite an experience.”

Finishing in 79 hours, he had lots of rolling time to soak it all up. Trev was blown away by the determination of all the cyclists overcoming their individual obstacles to make it to the finish-line inside their cut off times. As usual, he learned a lot and will pass on the stories and knowledge in the classes during indoor season! 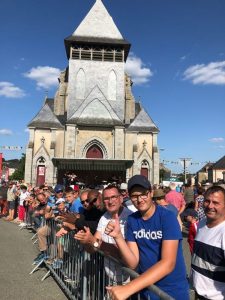 Typical shot of the crowds in the small towns along the way.

Every small community (about 50 along the way) celebrated the PBP with monuments and streetside nourishment in an endless stream to the coast! 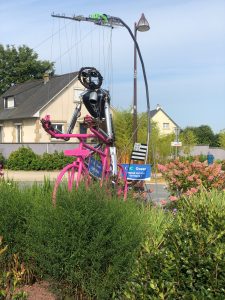 When do you sleep?

The premise of the event is to complete a specified course within a specified timeframe. This is essentially a rolling time cutoff, with ‘controls’ along the way to prove you have competed that segment of the course inside the time required. If you showed up to the ‘control’ too late, you were officially an abandon. Every cyclist had their own method of attaining this goal and tackling the challenge.

Trev and his crew’s plan was to ride hard between each control to bank time and allow them to sleep a bit along the way. Other cyclists chose the ‘slow and steady’ approach and slept extremely little. At the finish-line, Trev had slept 4.5, 5.5, 6.5 hours a night and been able to decompress every evening with Marie and finish just inside 80 hours. A gentleman finishing beside him at the same time had only slept 2 hours for the entire event!

Trev’s group at the finish-line 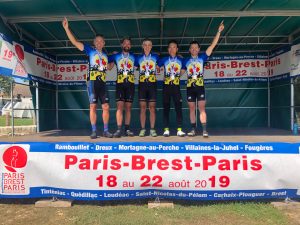 They started off with seven but they experienced their own obstacles. They lost one crew member at just 60km due to an event ending crash and another due to an alternative schedule. Other’s in the photo are friends Paul and Trev met through the years at the numerous qualifying events – Stephen from Vancouver, Mike from Arizona, and Toshi from Japan. Everyone was tired but happy to have finished such a unique experience.