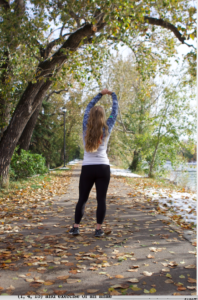 Chocolate milk is a common post-workout nutritional choice among many athletes, but the benefits are questionable. Post-workout nutrition plays a key role in repairing and building muscle as well as replenishing lost water and electrolytes.  It can even influence key markers that benefit endurance performance.  Having optimal carb/ protein snacks allows your body to digest and store that food as energy for future training (Moore, 2015).  However, if your post-workout meal has too many calories, you can easily run into the issue of a calorie surplus.  This happens when your storage units (primarily in the muscle and liver) are full, and the extra energy has nowhere to go.  That extra energy is primarily stored as fat.

The optimal ratio of carb:protein intake post workout has generally been set at about 3:1 or 4:1 (or 1-1.2 g/kg/ hr of carbs).  Chocolate milk happens to have this same ratio of carb:protein.  Therefore, it has been suggested that chocolate milk can be an “optimal” recovery drink.  Interestingly, this means a 139 lb adult (63 kg) would need 63g of carbohydrates, or about two servings of chocolate milk.  Two servings of chocolate milk has about 60g of refined sugar, which is well over twice the recommended daily limit.  Yet it is still widely accepted that chocolate milk is the optimal recovery drink, backed by “scientific” literature.  There are a few fundamental issues with many of the studies supporting this conclusion.

The first major red flag that pops out is that many of these studies are FUNDED by the Dairy Industry!! Even a seemingly valid study like this one published in 2019 in the Journal of the International Society of Sports Nutrition is funded by Dairy Max.  Or this one, published in 2006 in the International Journal of Sport Nutrition and Exercise Metabolism, was “supported, in part, by the Dairy and Nutrition Council, Inc.”. This funding decreases the validity of these studies.

Having industry funding creates a bias to report the results in a way that will support the investors, before the study has even begun.  This funding questions whether chocolate milk is the optimal post-workout recovery drink, or a way to encourage chocolate milk sales.

Scientific literature is often used in discussions as “proof” to convince others of a certain viewpoint. However, some studies have fundamentally flawed methods in the research design.  This allows authors to “back-up” a certain viewpoint and sound more convincing.

Comparing chocolate milk (containing protein) and a non-protein beverage in a strength test is setting up chocolate milk to “win”.  It is simply not a fair comparison, and the outcome is pre-determined.  Similarly, if you compare the tree climbing ability of any land animal and a fish – who will win?

Unfortunately, many coaches and athletes read the conclusions of studies like this without reading the “fine print”.  This results in the assumption that chocolate milk is the superior beverage above all other beverages. This would be an incorrect assumption.  Rather: chocolate milk is simply associated with greater improvements in strength compared to non-protein beverages.

Many of these studies are completely taken out of context. For example, this 2006 study claims that “chocolate milk is an effective alternative to other carbohydrate replacement drinks from exhausting, glycogen-depleting exercise”. This study compared a protein recovery drink, Gatorade and chocolate milk.  It concluded that chocolate milk was the “winner”.  However, in the “fine print” of this study, there wasn’t a huge difference between the chocolate milk and Gatorade.

In fact, “time to exhaustion” was slightly longer in the Gatorade trial compared to the chocolate milk trial (54% vs. 49%).  Unfortunately, this little statistic didn’t make it into the highlighted conclusions.  Instead, the Gatorade trial was completely ignored in the final statement that read: “chocolate milk is an effective alternative to other carbohydrate replacement drinks from exhausting, glycogen-depleting exercise”.

Furthermore, this study looked at a repeated exercises trial with a four hour recovery period in between exercise tests.  Certainly, a beverage with high sugar / carbs is needed to replace glycogen as fast as possible for another intense exercise bout four hours later.  However, if your next exercise session is not until the next day, you have PLENTLY of time to fully replenish your glycogen stores without consuming high amounts of sugar (i.e. about 60g of sugar in the beverage given to the participants).  In fact, if your next exercise session is more than eight hours away, you don’t need to rush to get a high hit of sugar into your body.

Since many recreational athletes only have one session/day or have long gaps between sessions, this refined sugar hit is not necessary.  Personally, I recommend either a protein shake, a dried fruit/ nut mixture or these energy bars with more natural sugars to replace your energy and set yourself up for your next workout.  So if you only have 4 hours to recover before your next event (i.e. pro athletes), then chocolate milk seems like a good choice.  However, with single daily workouts, save the calories and opt for something more nutrient dense.  Sadly, this study could easily be misinterpreted that chocolate milk is the best beverage for recovery in general instead of specifically for “speedy” recovery.

In conclusion, the high content of refined sugar in chocolate milk makes it non-optimal from a “healthy lifestyle” standpoint. In addition, many studies that support chocolate milk as the optimal post-workout recovery drink are flawed.  Having the support of the dairy industry immediately raises concern on the conclusions drawn.  Further, the experimental procedures are set-up to make chocolate milk the “winner”.  Lastly some of the results are not applicable to the average athlete and fail to make that distinction.  It is highly recommended that you do not take conclusions from scientific literature as “proof” of a certain viewpoints.  It is extremely important to understand the limitations of a study before applying their results to your own training.