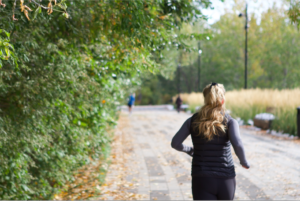 VO2 Max is NOT a Goal

You may have heard running economy and VO2 max are representative of your performance.  Although these two variables are great tools to track progress, they should not be the focus of your training.  Too often athletes get caught up in testing numbers and they forget their end goal.

For example,  your VO2 max is the amount of oxygen (in ml) you can breathe-in in one breath.  A firefighter may be required to achieve a certain score on a VO2 max test in order to gain acceptance into a program. Here, the VO2 max score is the GOAL. Likewise, a runner may need to achieve a marathon qualifying time of 3:15 to be accepted into Boston.  Here, your RACE TIME is the goal – not the VO2 test result.  Boston doesn’t care what your VO2 max score is, they care about how fast you run.  Your VO2 max is simply another variable that can be used to measure changes in fitness over time.

In fact, among elite runners, VO2 max differences aren’t really considered that important when predicting performance.  This study compared 2 groups of elite athletes with similar 10k race performance times, but one group had 13% lower VO2 max scores when compared to the other group.  Despite having different VO2 max scores, both groups had similar performances. This is likely explained by differences in running economy.  The group with a lower VO2 max had a significantly greater running economy (8%), and therefore, was able to maintain the same pace.

There is one main difference between running economy and VO2 max.  One is a sub max test and the other is a max test.  Running economy measures your energy expenditure for a given sub-max speed. This speed represents the pace you can maintain without accumulating lactic acid.  The faster you can run without building lactic acid, the more economical of a runner you are.  Two runners can have the same VO2 max scores, but differences in running economy and therefore differences in performance.  It is therefore suggested that runners within a similar range of VO2 max scores are likely separated by their running economy.

Running economy and VO2 max are excellent tools to measure fitness.  However, your performance on these tests do not indicate whether or not you qualify for Boston. Interestingly, it is important not to fixate on any one variable (i.e. VO2 max or running economy).  Therefore, a better approach to training is to systematically optimize each variable known to impact performance. Interestingly, the greatest indicator of performance can not be tested in a lab.  This is your self efficacy and mental resiliency.  Eliud Kipchoge is known for being mentally stronger than any other runner, which allowed him to break the 2 hour marathon barrier.  As many runners will tell you, running is 10% physical and 90% mental.