Last month, club member Jenn got to swim from Alcatraz Island to San Francisco. Have you ever thought about doing this? Read on to learn about her experience!

“In April 2020, I was supposed to go to San Francisco for a conference.  It is a large conference with colleagues from around the globe.  Several of us thought it would be a good idea to do the Alcatraz swim – a two-ish mile swim from Alcatraz Island to the shores of San Francisco.  We were all various degrees of a triathlete and thought this would be a fun way to spend a morning away from the conference.  Alas, 2020 had other plans for us all…. 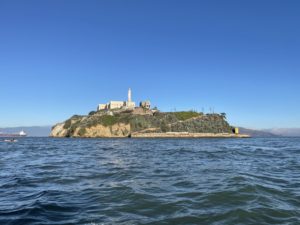 A little more than a year and a half later, I had the opportunity to revisit this plan.  November is the birthday of a dear friend and with 2021 a significant one, she invited several close friends and family to the bay area to celebrate.  Of course, being the Type 2 fun junkie that I am I googled to see if Odyssey Open Water Swimming would have a swim schedule for that weekend. In not believing my good fortune, they had a swim!  With excitement and anxiety, I thought hard about doing the swim.

I love open ocean water, I learned how to swim in the waters off Long Island.

From Coney Island Beach to Montauk, the waters of the Atlantic Ocean have played central in my upbringing and sense of place. The smell of sea spray evokes feelings of comfort and dusk ocean skies are beautiful.  I have never been afraid to be in the ocean—as adolescents we used to “hang out” treading water, bobbing up and down in the waves while chatting and teasing each other.  In my Atlantic waters, I am more fearful of jerks on jet skis than any shark or whale.

For me, it was the cold.  I hate getting into cold water.  I have done Polar Bear dips but only lasting for a couple of minutes. Even with a wetsuit, at 59F/15C I knew that I would still feel the ice.  The other trepidation was my reason for visiting—I was there to party with my friends and all that entails. In California. So also knew that I did not want to limit my Type 1 fun but being all YOLO I signed up.

I got to Oakland on Wednesday evening before Saturday swim.  Had a nice couple of evenings of low-key Type 1 fun—dinners and drinks, nothing too crazy. Odyssey had very good communication before the swim with information emails that included videos and a brochure describing the currents and pointing out key citing points during the swim.

I felt my first twinge of anxiety on the morning of the swim.

I woke early, had a couple of Aussie bites, a banana and hydration and caught my Lyft to Hyde Street Pier.  I saw the group of about 40 swimmers, they were pretty obvious—a group of people in wetsuits hanging out at the corner before anything was open.  I approached the group, got my number (15), a yellow silicone cap and t shirt. From there we boarded the small taxi boats; each holding about 20 swimmers plus the captain and a swim coach. 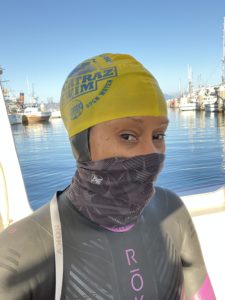 Connie was our swim coach and as we were driving towards the island, she pointed out the sighting landmarks. 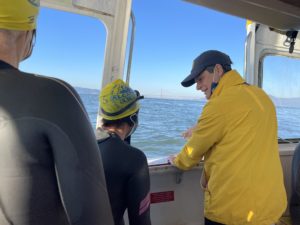 With fog in the distance, she warned that it could roll in pretty quickly but assured us that the kayaks would be nearby and would get us out of the water if visibility became an issue.  Otherwise, the sky directly above was quite clear and the air temperature was about 65F/18C.

As we taxied to the spot, just off Alcatraz, there were bats in my stomach knowing that I was about to jump into this frigid bay.

Dude across from me was in skin. Coach Connie mentioned that she always does those waters in skin.  Beasts, both of them.  I was sitting near the exit, but I definitely did not want to be first in the water.  I waited for a couple of people to jump in first, including skin dude.  Then. I. Jumped. In.

It was friggin’ cold.  59F/15C.  As I saw the others swim ahead of me, I started towards the two towers on the shore.  I did a couple of strokes but had to stop to catch my breath as the water felt too cold to breathe.  My whole body felt like she was having a frozen margarita brain freeze. I tried again but only got about four strokes before panic set in- where am I? Why am I doing this? Will I finish or will I die here and now from the cold? I turned over and took a couple of strokes on my back. I looked at the sky above but quickly flipped as I knew it would not be a good idea for sighting. 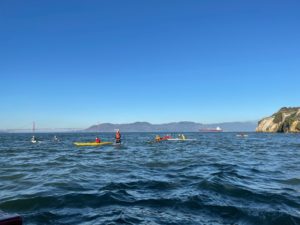 The current that pushed us westward was countered by the wind and chop coming eastward.  I kept moving forward as best as I could, while still feeling the shock from the cold.  It probably took me about 20 minutes to get settled enough to swim consistently.  With the wind and chop coming over the right side of my body, it pushed the swim buoy in such a way that it obstructed my left arm stroke. I got into somewhat of a rhythm with my right arm high and powering over the chop with my left arm doing whatever to avoid the buoy.

I kept sighting because a) it was still a challenge keeping my face in the cold water and b) I wanted to see the shoreline buildings getting closer.  The plan was (as briefed on the boat) to head for the buildings and then, at some point, turn west and swim parallel to the shore.  The buildings did not seem to get closer. I turned around to look at Alcatraz. It had a slight yellowish colour from the reflection of the morning sun, and it did not seem to have moved farther away.  I felt as if I was not moving from that very random spot in the middle of the bay.

Nonetheless I had no choice but to “just keep swimming.”

As I stopped for a quick tread break one of the kayak volunteers came along side to check in.  “Am I actually swimming forward?” I asked.  He assured me that I was doing fine and to keep it going.  Although the buildings did not seem to get closer, another kayaker told me to start swimming towards the Palace of the Fine Arts dome which was on a slight hill above the finish.

I continued and, finally, it looked like the shoreline was getting closer as I started to see more details on the buildings.  As I got more parallel and closer to the shore, I was a little sheltered from the wind and chop. I felt like I could focus on swimming—stroke and breath with less interference from my swim buoy.  The water was still cold but by that point I had gotten used to it (especially now knowing that I would be soon in the warmer sun). I approached the turn towards the beach and saw sand and other swimmers leaving the water.  The current, wind and chop scattered us, so it seemed like we all entered the beach from different angles.  I swam until I felt my hands touch the sand and then stood up and jogged out of the water.

Basking in the completion of Type 2 fun, I jogged triumphantly to the coach who checked off our numbers and immediately returned to the boat taxi that would get us back to the start. I wiped the silt off my face and took a sip of water. On the brief ride, we briefly exchanged our moments from the swim and took photos with the coach and boat captain.  Upon entering the marina, we saw a sea lion glance at the boat before submerging and cormorant birds basking in the warm sun.” 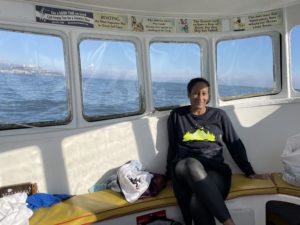 Thanks so much for sharing your swim from Alcatraz Island experience with us! Looking forward to learning what your next slice of Type 2 fun will be!   ~Coach Mary