Throw Out an Anchor!

This post was originally written and published on Aug. 31, 2017. Re-positing it to reiterate the importance of picking target races.

Last Sunday was the 15th and final edition of Ironman Coeur d’Alene. This race has always been a special race to me as it was my first Ironman distance event.  I sat down this morning and watched the 2017 Ironman Coeur d’Alene Wrap Up Video  and smiled, laughed, shed some tears and became incredibly inspired and decided to write about it…

Right at the start of the video I see two swimmers I’ve worked with. You will see Ken’s cousin, Isaac, with a heart warming pre-swim smile @ 2:54 and a very focused Lynn M doing some warm-up arm circles at 3:01…and then some “mouth stretching” at 3:08 ?.

Then, at 11:05 there is a profile story about a man who had a life threatening accident in 2015 when racing.  I continue to watch and realize at the end that I know this man (Scott) from a coaching course we had taken together back in 2013. I have lost touch with him, have no idea about his accident but now know that he crossed the finish line last Sunday a few short years after a catastrophic crash. He says two things in the video that really resonate with me.

His first comment is “forward is a pace” and later he speaks about “throwing an anchor out” as a way for him to find a direction when he was broken.  I know many people out there can relate to this whether they are dealing with injury (big or small) or they have lost their mojo as a result of a busy life or burnout.

This is such a powerful metaphor.  “Throwing an anchor out” absolutely provides one with focus and a path.  And as Scott also mentions, “forward is a pace”.  It doesn’t matter if you throw your anchor into next week, next month, or next year  – when you do so, you are creating an intention and a direction.

People have many reasons for getting involved in the sport of triathlon and they can range from becoming active and finishing local sprints to training hard to compete in world championship events. What I love about the sport is that achievement can be defined in different ways for different people yet there is great camaraderie among athletes in the sport. This is apparent in the video I watched this morning and I remember this from Ironman Canada 2011when I was at the finish line at midnight.  Steve King was going nuts on the mic and Pro winner Jordan Rapp (8:28) was in the finish chute strongly encouraging the final age groupers across the line. Finish Line with Jordan Rapp (Watch from 7:00 on) It was the alpha & omega. It still gives me goosebumps.

So, I challenge you to “throw an anchor out”!

Post update: in the month following this post last fall, seven more club members signed up for Ironman 70.3 CDA. It turned out to be the largest club race to date and was great fun. ? 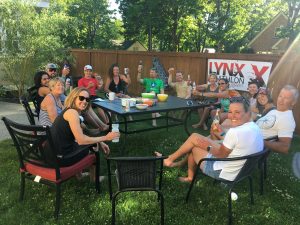