There were plenty of blue skies this past Sunday at the inaugural Ironman 70.3 Indian Wells La Quinta race. LYNX athlete Matt S registered for this event back in August after his “A” race, the Apple Triathlon, was cancelled due to smoke. This was Matt’s first 70.3 event and here is what he had to say about his experience at Indian Wells. 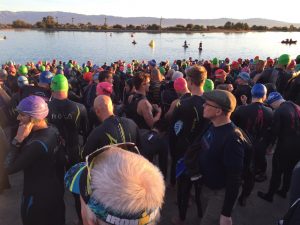 “Overall it went pretty well. Swim time was a little slow, but it felt alright. I forgot to start my watch at the start. I thought I hit start a few minutes into the swim but it must have already gone back to the main screen. Started it in transition after I grabbed my bike bag.
The lake water was cold – 57 degrees – and felt it on my fingers for sure.  Sighting  went okay, there were only a couple times when I said “whoops” to myself. I heard a few others say that it was a slow swim so maybe a little long combined with the cold made for slower than usual times.  Started in the second half of the 30-35 minute time group but probably could have moved up, had to pass a bunch of people. All the swim markers were on the right, which was nice, four 90 degree turns and a slight left turn through a gate.

Thought the bike went well. It was really my first bike race ever and probably the longest on my bike without stopping so I didn’t want to go too hard and bonk. Tried to keep my heart rate around 135, made myself slow down a couple times but it all felt about right. Had six GU roctane gels and 3 bottles of GU roctane drink on the bike plus half a Gatorade I grabbed from the aid station near the end. Four electrolyte tablets too.
The bike course was super flat and fast and I never got too hot on the bike. Most of the roads were good. Some newly paved and smooth and only a few older, rougher roads out in the desert.  Not too much wind, about an even headwind and tailwind.

Started the run well.  I experienced a little bit of camping in the legs but that was gone by a km or two in. The golf course run was a bit painful, lots of rolling hills and turns, as most golf cart paths are.  Had two gels on the run and water or Gatorade from the aid stations.  About halfway through, my gut was a bit unsettled – quick bathroom break.  Rest of the run too was a real struggle not to hit the bathrooms.  Didn’t really slow me down but made it hard to push at the end.

Being an inaugural event, there were a few little kinks in the morning.  Everyone had to park at T2, shuttle to the lake (which took longer than anticipated) so lots of people were rushed. But, other than that, it seemed like a really well run event, with some great weather, albeit cold water, and great scenery!  All the roads were closed to traffic and the lanes were all generous.  I would do it again definitely. 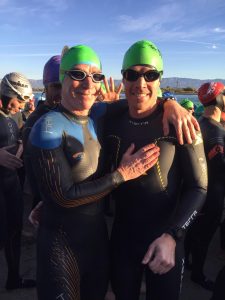 Thanks for sharing a bit about the course Matt! I can only imagine running on undulating golf cart paths – that would be tough! Good call double capping for the cold swim. And yes, next time seed yourself a little faster for sure. This way you can catch a draft early on and not have to swim around others.

Matt ended up finishing under five hours in his debut 70.3 and although he struggled with a some GI trouble on the run, he still went sub 1:30 for 21.1k!  His dad (pictured above) crossed the line fewer than 10 minutes later. My guess is that this won’t be the last event these two race together.

You can find more information about this race here.
Coach Mary
MENU