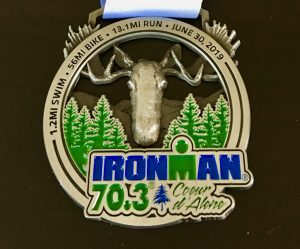 Some races don’t go as planned…

Ironman 70.3 Coeur d’Alene last weekend was one of those races for me. But, I crossed the finish line and consider the race to be one of my most successful achievements to date. I learned how powerful the mind is and that we can achieve so much more than we realize if we can harness our mental strength.

I love racing in Coeur d’Alene.  I have fond memories of my Ironman distance race there back in 2012. The city of about 50,000 welcomes IRONMAN events with open arms. There seems to be a limitless number of houses to rent for race weekend  within walking distance of the start line and it’s a very straight forward drive from Calgary. 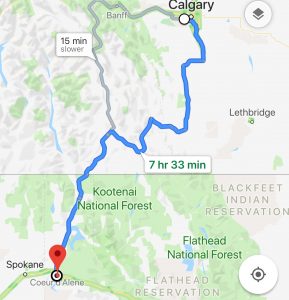 This 70.3 race course is interesting for racers and great for spectators. The swim is a one loop, 1900m rectangle with buoys every 100m. Racers seed themselves on the beach based on their projected swim time. Once the cannon sounds, racers are gradually funnelled towards the start line where they are sent off four at a time, five seconds apart. There is plenty of space on the beach for spectators to watch the swim and track their athletes heading to T1. It’s fun for racers as well running through all the cheering fans.

The bike course is a single loop that starts off with a fast and flat out and back section of about 30k before you cross over Lake Coeur d’Alene and literally “head for the hills” on US-95. You climb and hit what feels like continuous rollers until 57k then turn around and head back. Average grade on the hills is about 6% – nothing crazy – just long hills.

The run is two loops and fairly flat. Although there isn’t much shade on the run course, there are aid stations every mile all with cups of ice available. In addition, there are many locals out with hoses offering cool down sprays. There are also people singing and dancing and cheering you on all along the course. Another run course highlight is a bagpipe band that runners get to pass four times.

I had been fighting a cold during the week leading up to the race. These things happen, I wasn’t too concerned. I got some extra sleep during the week and assumed it would pass by race day. Unfortunately, this was not the case. When I left for CDA the cold was in my chest, I had zero energy, and as an added bonus, a stomach bug was causing me grief. Saturday I opted out of the pre-race swim and only ate dry toast. I wasn’t sure if I was going to race the next day but checked in my bike anyway. The rest of the team who did the recon. swim said the water was clear and the perfect temperature for race day.  (It was reported to be around 20C) 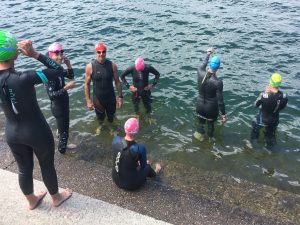 Saturday night I decided I would give the race a go the next day. I adapted my goals to align with how my body was feeling. I knew my original goal of being faster than I was the prior year in all three legs was simply not realistic. Time goals were thrown out the window and replaced with process goals for each leg. I took a hefty dose of cough suppressant before bed so I would not disturb my sleeping teammates with my  cough and also hoped I would get some rest myself. I packaged up cold & sinus pills along with stomach medicine and set them with my fuel and nutrition for the next day.

As soon as I woke up on race day, I tried to adopt a “can do, will do” attitude. I knew I was racing so I wanted to stay positive. I ate my normal pre-race breakfast (oatmeal) which unfortunately didn’t sit well.  Shortly after, I took my first round of stomach pills (aka Immodium) and was on my way.

I love to race. I love the feeling of adrenaline and anticipation at the start line. Even among the masses, it worked out that I got to line up for the swim start with Ken & Liam. It was nice spending those final pre-race minutes with familiar faces. The water was lovely and as I did my dolphin dives at the start I felt pure joy. After I passed a few buoys I realized I felt “normal”! No hacking cough, no tired muscles, just me swimming. My process goal for the swim was to sight better than I had the year before. 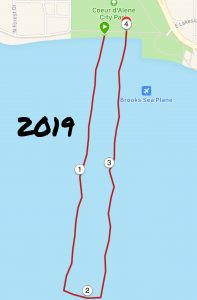 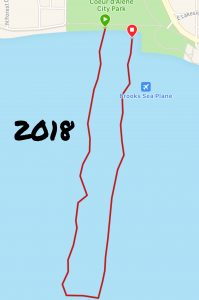 And I did. Yes, there is still room for improvement! Despite swimming in a straighter line, I still managed to swim an extra 112m. My stroke rate was identical to the year before, but my pace / 100m was four seconds faster this year over last. Off to a good start!

The transition from swim to bike was uneventful. The fast and flat first 30k is always great fun and I was feeling pretty good. About twenty minutes into the bike, I had a little scare when I heard a loud ‘pop’. I initially thought my rear tire had blown but when I looked down I saw some scattered white things (photo below) on the ground. I realize now that they were tiny fireworks called “bang snaps” that someone had scattered there. ? On a positive note, I was happy I didn’t have to change a tire 10k into the race.  (Curious if anyone else encountered these tiny explosives?) 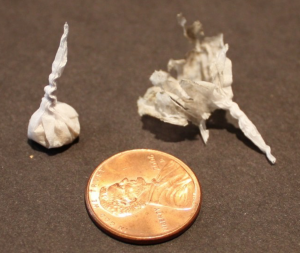 Finished the first 30k, headed for the hills and that’s when things started to take a turn. I knew I had to be extra vigilant with my electrolytes and fluids being fairly depleted from the get-go and given the heat. Accordingly, my process goal on the bike was to drink regularly and I did. As I was riding though, I just got tired – really, really tired. I was riding slowly and getting passed continuously. Each time I got passed my negative self talk become louder and louder and increasingly hard to silence. I focused on just getting to the 57k turnaround knowing that the course would become easier with the long spans of downhill on the way back. Sadly, I was mistaken.

After the turnaround, it became obvious that there was a pretty solid headwind. Although there were downhill stretches, I had to pedal through them. My hopes of a relatively easy cruise back to transition were obliterated.  It was hot, my throat was raw, I felt nauseous, had little energy and continued to get passed. I was in a dark place and just kept repeating to myself “just keep pedalling”.  Although I kept drinking, I wasn’t taking in the calories I needed. Feeling as low as I’ve ever felt before, I decided that my race would end after the bike.

Made it back to transition, twenty minutes slower than the year before, and walked to my bike rack. I felt terrible and was still thinking I was done for the day. While walking, I heard people calling to me “have a good run”. I sat down to take off my bike shoes and automatically started putting on my running shoes. With this action, I thought I would at least try to run and see what happened. Took a few more stomach pills for good measure, let the volunteers lather me up with sunscreen, and started out in a very light jog.  My body felt ok! I ate bananas at the first few aid stations and started to get some energy.

Once I got out of city park I forgot about the bike leg and decided that no matter what, I was going to cross the finish line. My process goal was to walk the aid stations but outside of them, to not stop running. My mantra was “I feel fine, just keep moving”. I didn’t feel fine but I told myself over and over and over again that I did and in doing so, I convinced myself it was true! As I think about it now, this mantra was effective because it focused on what I wanted to feel, not all the negative I was trying to overcome.

I’ve heard about the power of mantras before, and encourage my athletes to use them, but this was the first time I have ever experienced their high degree of effectiveness. I’ve seen photos of myself on the run and I really do look terrible. BUT,  I can see the focus on my face – the grit and determination in my expression  – the drive to convince my body to keep moving forward. I now see strength and success on my face rather than weakness and failure. I will remember this race as the day I learned about the power of my mind. As the medal the volunteer swung around my neck at the finish line states, “Anything Is Possible”. 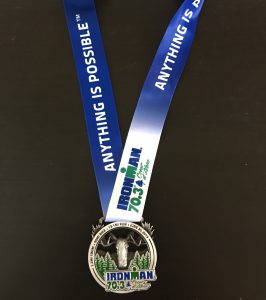 This race is truly awesome – even on a bad day. I will likely return next year as I have unfinished business on this course. Who’s going to join me?!?