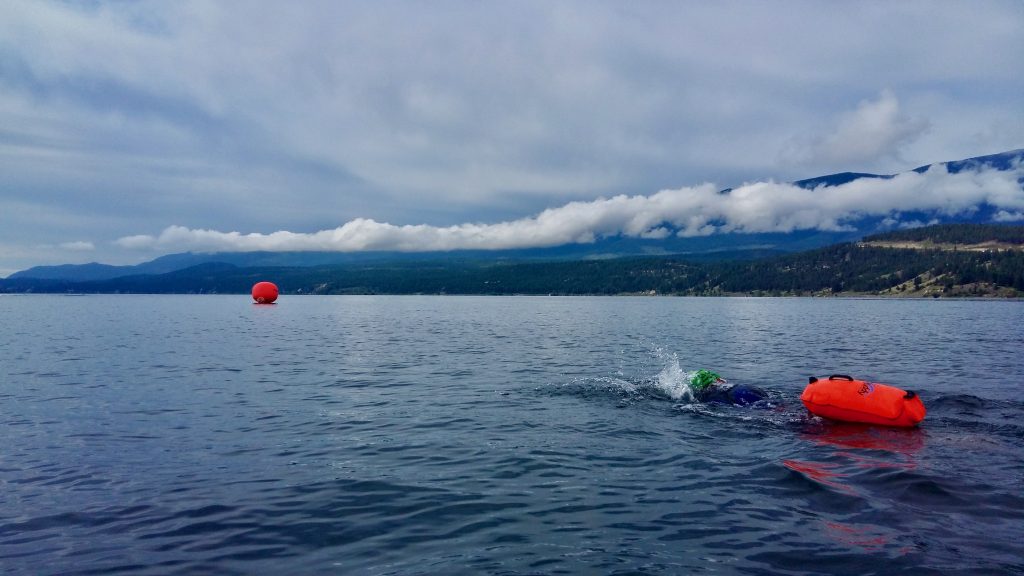 After a near drowning experience as a five year old it seemed unlikely I would ever learn to swim. Taking Adult Learn to Swim lessons at age 33 led me to my first Ironman. But, even with training & increased fitness I still never really felt comfortable in open water, even in sprint races.

I signed up for Coach Mary’s ‘Red Mist’ sessions this year. During these 90 minute – two hour sessions I swam further at a slower pace than my shorter more intense workouts but still got some breaks. Therefore, these Red Mist swims weren’t as intimidating as I thought they would be. What I have realized is that as my endurance has increased, almost counterintuitively, I’ve found it easier to focus on technique. I’m comfortably able to skip a breath or change up my breathing pattern to avoid a splash to the face from a lane mate or to avoid other swimmers during the congestion of a mass start. I’m never struggling to get a breath, which has given me more confidence in open water.

During the Oliver training camp Coach Mary took us through a routine to prep for the cold water & warm-up. After about a dozen open water swims this year I’ve gotten better at sighting and become completely comfortable with low-to-no visibility.

I met Bert & Alex, both multiple Skaha Lake Ultra finishers (11.8km!), at the LYNX Red Mist sessions.  This Ultra Swim event has been in my mind for about ten years. It’s been great to be able to tap into Bert and Alex’s experience swimming ultra distances.

The Heart of the Rockies Open Water Swim has three distances to choose from: 1k, 2k and 5k. I chose 5k. Getting ready for this event isn’t anything beyond the prep for an Ironman swim and my Swim Buddy with my cell phone inside gives me another level of confidence. I’ve realized there are a pile of open water swim events I was unaware of. For instance, The Rattle Snake Island Swim (7km) that crosses Okanagan Lake and goes around the Island and back across the lake. How cool is that?!  Putting that on the bucket list along with Escape from Alcatraz.

Enter Heart of the Rockies

I needed to do some long open water swims to prepare for Ironman Canada anyway so found this race online!

After regularly swimming 4-5km in the Red Mist Sessions, this race was a no brainer. I was confident with my fitness. This event was going to be about gaining more confidence in open water.  The website suggests you have a support paddler. I had a scary experience on a small boat with five foot waves in a storm on Okanagan lake and I had no interest in reliving that without an emergency evacuation plan! I don’t own a kayak and didn’t know anyone who would be interested in paddling alongside me during the event. When chatting with Alex, he mentioned hiring someone for the job. I called Columbia River Paddle Company to see if they had someone who could help me out.  After a couple emails I had my paddler confirmed.

Weather was forecast to be 70% chance rain & thunder showers. I was pleasantly surprised to wake up to sun & partial clouds.

I arrived at the lake to see calm water and met my support paddler. Admittedly I was feeling a little sheepish hiring somebody with the conditions being so good. But, being right in the middle of the lake you’re at the mercy of the conditions if a storm blows in or the waves pick up. (One of my fears) Having a paddler makes the unlikely encounter with a boat even less likely (another fear), so I think I’ll organize a paddler next year anyway. Got underway at 9am for a group start of about 40 people for the 1, 2 & 5km swim.

Was surprised how shallow the water was until we were almost 400m offshore. Had none of the jostling you get in triathlon. The fast swimmers took off quickly leaving me on my own. I chose my clear goggles over my tinted due to the low light.  Still had to contend with some glare with the sun rising.  The buoys were hard to see, especially being almost a kilometre out. When sighting I picked up some support kayaks ahead and a couple of peaks on the horizon to use for secondary sighting points.

I had some boat traffic wakes to go through, but did as Mary has coached and increased my stroke rate and altered my breathing until I was clear. Most of the wakes took me sideways and a bit off course, but I also had a few favourable wakes that pushed me forward. I was pretty happy to hit the last buoy at the 2km turn around, just had to swim back. Once we were close to shore we had a 500m out and back segment to add the last kilometre before heading to the finish.

With 1km to go, my watch read 4.5km, and displayed 5.6km at the finish. I did a little zig-zagging but if I’m to believe my Garmin, the course was a little long.  But, I was looking for a longer swim, so this extra distance was fine by me!

Overall, a great experience. I will do this event again and maybe the Rattle Snake Island 7km swim in August!

Glad you had a great experience and are gaining confidence in open water Trevor!  Your hard work is paying off. ?  Coach Mary 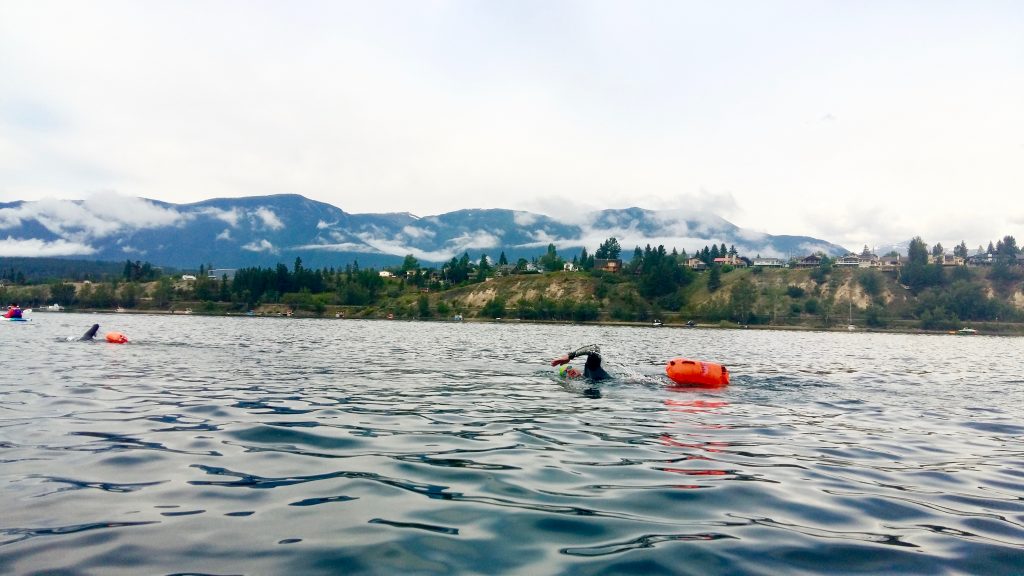