Morten and I recently returned from a week in Cape Breton, NS and PEI. This trip has long been on our bucket list and it was just as amazing as we had imagined! 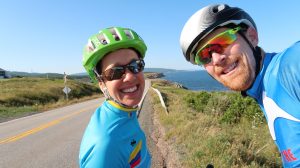 Planning this trip gave us an easy excuse to buy new bikes! We both chose gravel frames, which we outfitted with 28 mm wide road tires and bike-packing accessories. Fully loaded, Morten rode the “Black Tank” (Trek Checkpoint) and I was on the “Shiny Torpedo” (Specialized Diverge). 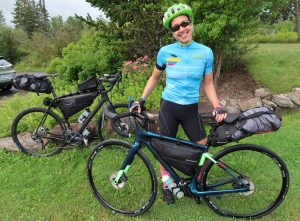 We started with the Cabot Trail on Cape Breton, NS. We chose to do the 300 km route over three days, travelling counterclockwise and starting in Baddeck. We left our rental vehicle there and packed our bikes with a change of clothes and other essentials and headed off on our adventure. The route was beautiful, especially when we hit the coastal portion on day 2, but we had to work for those views with two significant climbs that day. 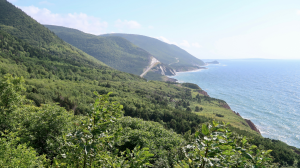 We divided the trip into three days of roughly 100 km, staying overnight in Ingonish and Chéticamp. We had read that there were not many places to stop along the way, but we actually found that there was no need for the large emergency stash of energy bars I had packed, as we seemed to pass cafes just when we needed a break. There are also plenty of opportunities to stop and look at work by local artisans, although there was no temptation to buy and add extra weight to our bikes! 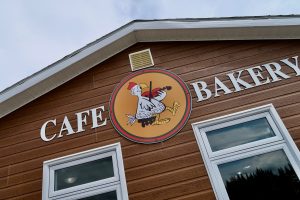 After completing the Cabot Trail, we savoured a rest day and loaded the bikes back into the rental car and headed for Charlottetown for the PEI Gran Fondo. For those of you not familiar with this GF, it is an amazing deal with three days of beautiful riding, a very unique jersey (usually a lobster pattern, but this year featured PEI’s charmingly tacky provincial flag design) and three fantastic meals for a registration fee under $300. Day 1 and 3 were more informal rides, guided by “ambassadors” in different pace groups and with various distances available, with day 2 being the actual Fondo (choice of 100 km or 150 km). Naturally, we chose the longest route possible on Day 1 and went with the “hammer” group for 94 km, so this day ended up being pretty hard for the warm up day! Unfortunately, day 2 for the fondo dawned grey, gloomy and windy and things only got worse from there. What should have been the most breathtakingly beautiful stretches along the northern coastal beaches ended up being a real challenge, as we dealt with a relentlessly strong gusty side wind while being pelted with rain and sand. It was a tough day for everyone, which provided plenty of good stories to swap later that night at the buffet lobster feast and awards presentation. 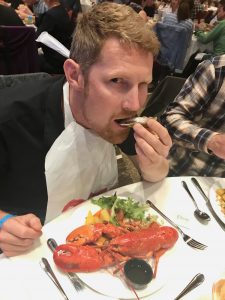 Although there is no prize for overall time, there were two timed stretches:  a short sprint and a short hill climb. With Morten’s encouragement, I had summoned some extra enthusiasm 125 km into the difficult ride and managed to secure the QOM and was later awarded with a very special dotted jersey in an unmistakable cowhide pattern!

This was our first trip out east, but we will most certainly be back – with the bikes, of course!

If you are interested in both the Gran Fondo and the Cabot Trail, it is worth mentioning that the organizer of the PEI GF also runs a Cabot Trail GF each year. He also does it over three days. You bring your own camping gear and they transport it each day for you and provide all meals prepared by a talented chef – all for $160!
Road conditions were, in general, not pristine. We were happy to be on sturdy frames with wider tires to handle the extra bumps with confidence. There was not much of a shoulder for the majority of the route, but we found drivers to be quite courteous in giving us plenty of space. Traffic safety was top notch at the PEI GF, where they had professional traffic controllers on duty for entire route.

Thank you so much Dana & Morten for sharing the details of this amazing trip!