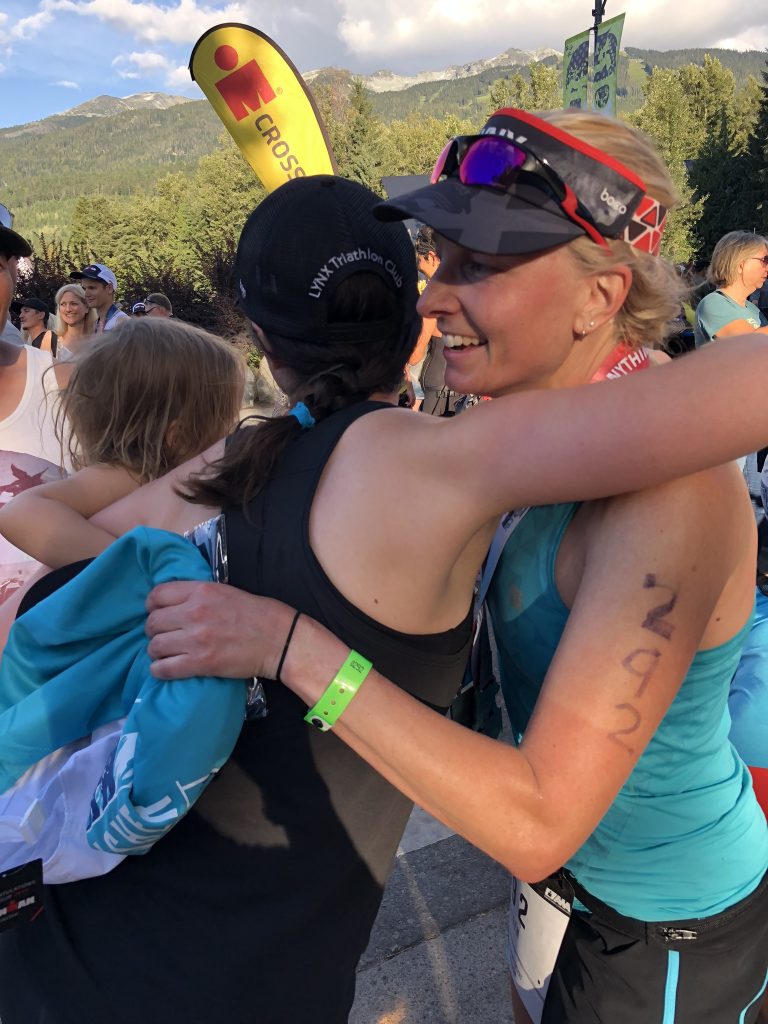 My journey to Ironman, started a bit unconventionally. What was intended to be a fun indoor match of soccer turned into a long game of recovery. However this fuelled the motivation to heal properly while working towards Ironman.

Once I heard the word “broken” I felt lost. Training is simply something I enjoy. I was in the training groove, even beginning to peak, but all came to a grinding hault with injury.

My focus needed to change from the “what ifs” to the things I could control. I had been thinking about registering for Ironman Whistler but I had been on the fence between it and another race. With two different goals in mind two different races were on the horizon. However once my injury happened I felt a sudden change of heart.

I felt I needed to process the injury and make sure I let it heal properly. For me that meant making sure I didn’t rush the healing process. I decided that I wanted to race Ironman and in order to do so I needed to take the time to let recovery take its course. So a few weeks after my injury my registration was completed.

I was now on the road to Ironman. It came with excitement but it certainly came with worry as well. I would be going into the race behind on my training as I still was unable to do all the activities I needed. Rather then focusing on what I couldn’t do I needed to mentally focus on what I could. Taking ownership of my mental game helped me deal with the ups and downs of the recovery process which can include setbacks.

We all face the time dilemma, can we fit all the training in? We ask this of ourselves all too often. But we get creative so we all can toe the start line with whatever we can bring on race day.

In what felt like a very short time race day arrived. I think I was more nervous for this one then my first.

The drive to the lake was very quiet, the mood had been set. People were internalizing their feelings and processing the day in front of them.

The swim was beautiful and very spacious, I didn’t have many problems at all. However, I felt I couldn’t get into a good rhythm and I felt myself starting to lose focus. I looked at my watch about 600M out of the finish line and realized I was much slower then my previous Ironman swim.

Initially I was bothered by this, but after taking a step back to evaluate why I felt I was there I could see that I landed where I had placed myself with the training I put in. In preparation for Ironman this time round I focused more on the run and the bike after my foot healed. Given that I am a life long swimmer I took that for granted and spent less time in the water and more on the bike and run. So yes I had the swim I had prepared myself for but did find gains elsewhere.

I am going to be honest here, I was worried about the bike. I am a big ring rider who loves to grind on flats, you say hill and I think my legs quiver in fear.

In the end, however, I really like the bike course. It was very easy to break each 90km loop into three parts. It made it very manageable physically and mentally. The first 90km loop flew by and I really enjoyed it. I did take the time to stop at the special needs station at the 90km mark. I grabbed my second bar and shot blocks that I had placed in my special needs bag. My bento box is a bit small so I couldn’t carry all of it with me.

I had been experiencing chaffing issues so I took the time to address that at special needs as well. I don’t have chaffing issues on my road bike, this is very different for me on my tri bike. It has been a work in process finding out what works for me but I had a plan for the long ride so I felt I needed to address it when I stopped.

I was off for the second loop. There was a bit more congestion to start on this loop as the 70.3 racers were close to finishing. The second climb to Callaghan was tough but I focused on keeping my cadence up and continuing to fuel.

At the last aid station before the turn around at the top I was unable to grab water. It was a bit congested and I thought I would grab on the way back. That was a mistake on my part that I would discover a little later. As I started the decent the station was only on one side of the road so not accessible. As I passed, I thought no problem, I would grab more on the bottom. I decided to take one last sip of water before my decent and that was when I realized I had a problem, I was out of water.

My aero water bottle holder is black so visually I can’t see the level and I do consume much more water when it is up front. I didn’t get too worried as I thought I would grab after the descent. But as I got down to the bottom the heat was increasing and I was feeling thirsty. It was shortly thereafter that I realized again the aid station was on the wrong side of the road. Suddenly I realized I was another 20km away from water. I had to slow myself a bit and focus on the task at hand, riding safe and getting to the next aid station. I felt myself start feeling a bit off so I just focused on riding in a position I would feel safe.

Then finally… the aid station was there. I stopped and looked at the volunteer and told him I couldn’t wait to see them, that I was out of water. He simply said “lets get you going”. He filled my aero water bottle and handed me a second bottle to carry in the cross bar cage. Then asked if I needed anything else. I decided I wanted a banana as well. I wanted a quick fix on how I was feeling. He grabbed me one quickly and had me all set. He was wonderful and I thanked him many times as I got back on my bike.

I felt so much better, I drank quite a bit to start and dumped a bit of water down my back. After about 10km I felt more solid and picked my pace back up again. I had about 25km to go and was ready to get the bike done.

I did a quick gear change in the tent and started my run. My legs were done spinning and all I wanted to do was pound my feet on the ground. I started off at a pace that was far too quick, I stopped and made myself walk for a few minutes to reset myself. Once I started running again I felt great. I was holding my pace and feeling good.

As I was starting into my second loop my back started spasming, my pace was dropping like a lead balloon. I was creeping into that negative zone that we hit when your body starts feeling discomfort and your brain starts to take over. I had to walk off and on quite a bit in the middles section of the run.

Eventually I came upon another racer and he said to me “we will get this done”. Silly me I asked “if I walk from now on will I finish before the time limit?” He said “yes”, that was my reset. He said lets walk to that corner ahead and try running. I agreed. We did the short walk and then started running. We ran to the next aid station and we parted ways. He had given me the boost I needed to climb out of the dark place I had hit. I had about 12km to go and ended up running (aside from the aid stations) a good chunk of it.

Once I was about 2 km out I had a new found energy. I picked up the pace and was full of energy with the desire to get to the finish line. As I neared, the crowds were amazing. People were directing me to where I needed to go and cheering me on. Some guy said “you are an Ironman just around the corner” It was incredible. As I came to the shoot, I was excited, I was going to hit that finish line once more.

My journey was not without out ups and downs that we all face as athletes, but it carried me to the finish line. The cheering crowds, fellow athletes and volunteers on race day create the most humbling atmosphere that I love to be apart of. It is a quick reminder of why I love this sport.

To the people that wish you well along the way, up to, during and after race day, Thank you!

Your simple kind words speak volumes as we head into race day while going through preparations and feeling anxiety and excitement all at once. Race day although considered an individual event, its not entirely. We all get there by being part of a team. By team I mean, fellow athletes, volunteers, coaches, family, friends, partners, support personnel and all others. Thank you to you for being part of our journey taking us to Race Day.

Thank you to my team supporting me on my journey.