I was glad to wake up in Canmore race morning, rather than having to drive in from Calgary and have to be up that much earlier. Why do triathlons all have to start so early? I’m nervous and can only get a bit of my breakfast down. This will haunt me later. Connor and I get to the Nordic Centre and we find his parents and other LYNX folks. The view at T1 is breathtaking. The pre-race meeting is informative and humorous and I start to relax, but not enough it would seem.

Quarry Lake is one of the most picturesque places to do an open water swim. I got in before the race and got acclimatized to the temperature, which didn’t feel too bad at 18 degrees. The start was described as ‘waved’, but it was really two mass starts. The first for the sprint athletes, and the second for the full distance athletes. Perhaps it is the nature of being in a sport that is historically male dominated (mountain biking) but the swim seemed like a literal sea of men. 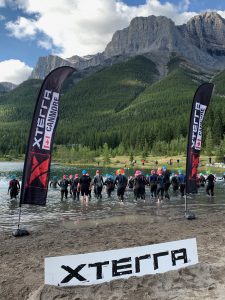 Knowing that I have predictable OWS anxiety, I did a lot to prepare, and was much less anxious about the swim then I have been in the past. Unfortunately, fears are often irrational, and despite my efforts to keep it at bay, I immediately panicked at race start.  As someone once described anxiety to me, it is like trying to breathe through a straw. This is accurate for me. Luckily, I knew I just had to catch my breath and talk myself down, so I held onto a kayak and was good to go after. Despite getting myself together, the rough start messed with my mojo. It only added seven minutes on to my predicted 1,500M time, but it impacted me much longer. It was well into the first 5K of my bike before I felt I could shake it off.

The best way to describe T1 for me was peely wally. I did all the things you shouldn’t do: 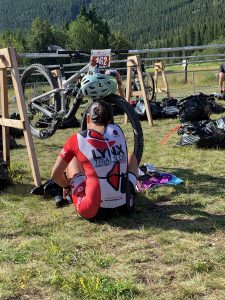 Luckily as I rolled up the Nordic Centre I did remember to eat some granola bar. I spent the better part of the summer fretting about the bike portion. I pre-rode the course twice; once lightening quick with LYNX Josh (which really helped me with pacing race day, ?) and another time with a local mountain bike instructor who works at Shred Sisters (highly recommend them if you are a woman interested in taking up mountain biking).  This helped me heaps on race day as I knew where I would be walking my bike, where I needed to maintain speed, and where I could gain speed. The bike course really throws it all at you with tough climbs, fun descents, and some technical black sections over two 13KM laps.

I had also mentally prepared for being passed by the race leaders on the first loop. I do think knowing that their presence was imminent wigged me out a bit. I was constantly on edge hoping I wouldn’t hold them up; but I also didn’t want to have to stand bedside my bike forever while letting a bunch of quick dudes pass by me. Of course, it is never as bad as your brain makes it out, and only one guy passed me dangerously, and although I did have to pull to the side a number of times, they were so quick I wasn’t waiting long.

By lap 2 I am getting really hungry. How does one eat when mountain biking? I am either sucking wind climbing, or speeding down with intense concentration. Liquid calories next time (if there is one!) Perhaps from the hunger (and really needing to relieve myself) I felt slightly on the edge of delusional the whole second lap. There were numerous moments where I was cackling to myself in the woods; I thought I was hilarious that day. Despite my pre-race trepidations and intense hunger, this was the most fun I had all day. If you do not already mountain bike, I highly recommend you try it! 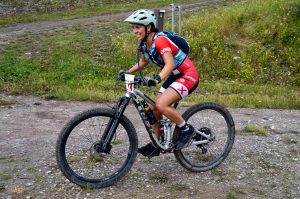 This was done pretty quickly as I just wanted to get out on the run. Perhaps too quickly…. I forgot to ask for help undoing my tri suit so I could finally relieve myself, I left my snacks behind, and I forgot my bear spray on my bike and had to go back to grab it!

I had spent all my mental energies preparing (fretting) for the swim and bike so I didn’t even know the run course beforehand. I almost ran by a course marshal telling me to turn. The run was very rolling, hilly, and rooty. Compared to the 5 Peaks Half, which was also at the Nordic Centre, I thought this was a harder course.

I still needed to pee. My slow-working mind runs by a building with at least five doors that say “Washroom”. Upon closer inspection after running off course to inspect, they are locked shut and say “Waxroom”.

Lap 2 of the 10K run course felt like the twilight zone. It was one foot in front of the other with a lot of walking. I still hadn’t made it to the bathroom and was getting increasingly hungry. I literally saw the ‘Waxrooms’ again and got excited about a bathroom….? 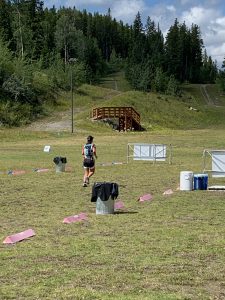 Thank goodness I finally saw a person. I asked him to unzip the back of my tri suit (note to self, tie a string for better future access). I decided I was going off-piste. And then I had another outrageous laugh to myself in the woods for being so punny.

The run was a grind. I had nothing in the tank, and being close to the back of the pack, I saw no one. As a race organizer myself at Run Calgary, it really impressed upon me the import of keeping volunteers and marshals in place for as long as you can. I was feeling really disheartened and could have just used a person to say ‘good job’ but by the second loop there was no one left out there.

With about 3 KMs to go, a handful of Whiskey Jacks flew alongside me for awhile, and I got my final wind thinking about my ‘why’, which is emulating my brave mother. She always loved birds and lived her life so fearlessly.  I started to cry even before the finish, as I was just so exhausted and happy to be done. When I saw that every last LYNX person had stayed to watch me finish even though some had completed their race hours earlier, I lost it. What a great community to be a part of. 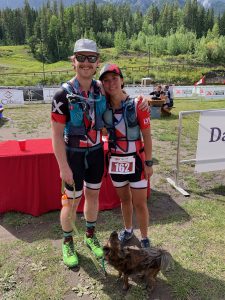 Xterra Canmore was the hardest endurance event I have ever done, but I would 100% recommend it. You absolutely cannot beat the challenge, the scenery and the beauty of the course and despite a few small gripes the race overall was very well organized.

Footnote:  Thanks so much for sharing your race report with us Steph! It’s pretty darn cool what you challenged yourself to take on and what you achieved after just entering the sport of mountain biking. It was great seeing your smiles out on course and high-fiving you at the finish. You rock. ?